They are facing questions from Buckeye State voters as they vie for the support of blue collar and minority voters who underpin the Democratic coalition.

Sanders took the first turn in the spotlight and will be followed by Clinton in the event moderated by CNN’s Jake Tapper and TV One’s Roland Martin. The event takes place in the wake of Sanders’ surprise victory in the Michigan primary last week, which raised his hopes of competing with Clinton across Midwestern Rust Belt states.

It also comes at the end of a weekend filled with violence and disruption of Trump rallies, in which the real estate mogul pointed the finger at Sanders for the unruliness.

But Sanders said Sunday night, “Our campaign does not believe and never will encourage anybody to disrupt anything.”

He added that people have the right to protest even though he said other candidates’ rallies shouldn’t be disrupted.

“Trump has to get on the TV and tell his supporters that violence in the political process in America is not acceptable, end of discussion,” he said.

At the same time, Sanders dismissed the idea that he was responsible for the actions of all his supporters.

“Millions of people voted for me. If I have to take responsibility for everybody who voted for me, it would be a very difficult life,” Sanders said

The town hall was also an opportunity for the two Democratic candidates to highlight their differences even if they didn’t meet face to face.

Sanders pivoted to his Democratic opponent on the issue of trade, which is emerging as a key theme on both sides of the aisle in the 2016 presidential race.

He lashed out at “corporately written trade agreements,” which he said were designed to shut down U.S factories and pay people “pennies an hour” in China and Mexico.

“One of the very strong differences between Secretary Clinton and myself — she has supported almost all of those trade agreements, I have vigorously opposed (them),” he charged.

At one point while talking about trade though, Sanders slipped in another backhanded slap at Trump. Defending his position on trade, Sanders said that he did not want to cut off the United States from global trade flows.

But Clinton has so far built a more diverse constituency resting especially on African-American voters and Hispanics and appears to have the edge going into Tuesday’s primaries in Ohio, Florida, Illinois, Missouri and North Carolina.

Still, Sanders has high hopes of good results in the Midwest in particular and has been driving his message that the economy is stacked against working Americans and underpinned by a corrupt political system. 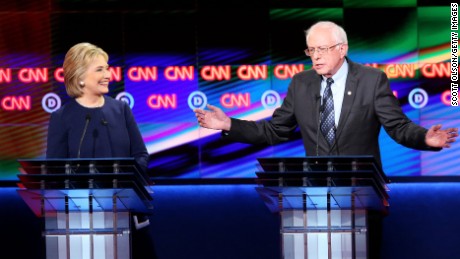 On Saturday, Sanders rebuked Clinton over her role in conceiving of the Trans-Pacific Partnership, a vast trade deal linking Asia and the Western Hemisphere. It is a lynchpin of President Barack Obama’s pivot-to-Asia strategy that she helped implement as secretary of state.

“I hear Secretary Clinton is in Ohio tonight talking about how concerned she is about the auto industry — an industry decimated by the North American Free Trade Agreement and normalized trade with China. She supported those bad deals. I opposed them,” Sanders said.

“Now she says she wants to make it tougher for automobiles to be imported to this country under the disastrous Trans-Pacific Partnership. That’s the deal she called the ‘gold standard’ when she was secretary of state,” he continued.

Sanders has called for the pact to be scrapped while Clinton has called for it to be improved, and the Vermont senator is trying to take advantage of the difference in their approaches. 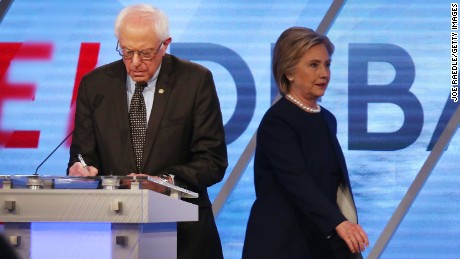 “I have a message for Secretary Clinton: We shouldn’t re-negotiate the Pacific trade proposal,” he said. “We should kill this unfettered free trade agreement which would cost us nearly half a million jobs.”

Clinton, meanwhile, chose to go after Sanders over his attacks that she is not sufficiently progressive, questioning his role when she was fighting for expanding health care as first lady.

“We are going to pull together and stay together and stand up against those powerful forces. And I always get a little chuckle when I hear my opponent talking about doing it,” Clinton said on Saturday. “Well, I don’t know where he was when I was trying to get health care in ’93 and ’94, standing up (against) the insurance companies, standing up against the drug companies.”

The Sanders camp hit back quickly, tweeting a photo of Sanders standing behind Clinton at an event at Dartmouth College on December 7, 1993.

“I am grateful that Congressman Sanders could join us today from Vermont,” Clinton said at that event.

Tuesday’s primaries are hugely significant because they make up the third-highest allocation of delegates available on a single day in the Democratic presidential race.

A new poll by The Wall Street Journal and NBC published on Sunday shows Clinton leading Sanders for the three biggest prizes available on Tuesday. She is up 61% to 34% on Sanders in Florida, leads him by 58% to 38% in Ohio and by six points in Illinois.

Still, Sanders will be hoping that the last Tuesday’s events are an omen for this week after he went into the Michigan primary trailing badly in polls but still managed to best Clinton.

The former secretary of state, however, is looking to further bolster her lead in delegates over Sanders on Tuesday.

CORRECTION: This story has been updated with the correct number of superdelegates for Vermont Sen. Bernie Sanders.