Photos by Lee Smith
I visited several locations in Broward county searching for owls and came upon a cute family of burrowing owls in this one burrow.

All my photos are for sale, just contact me and let me know what you are looking for.

I traveled to Long Pine Key, in the South Florida Everglades well before dawn to capture the reflections of the morning light.

All my photos are for sale, just contact me and let me know what you are looking for. 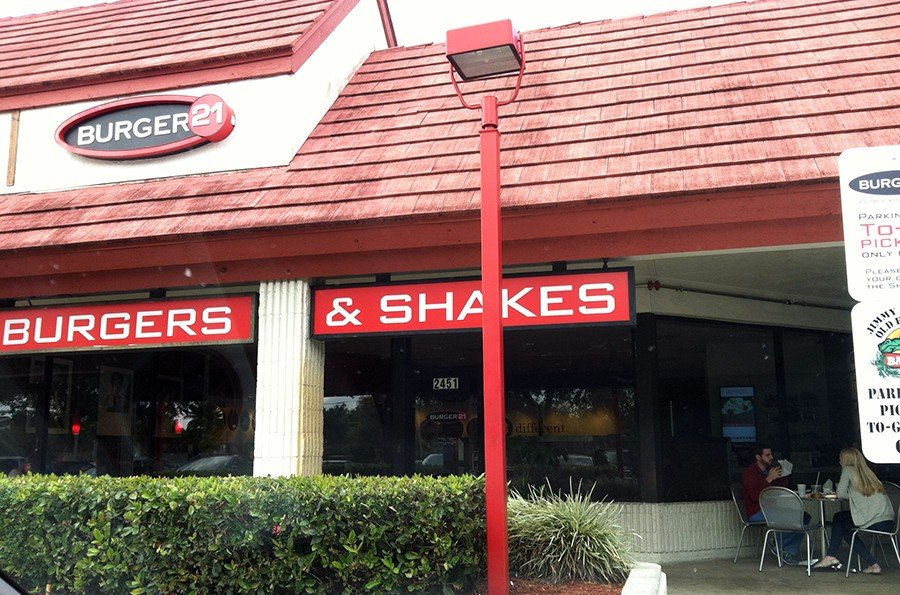 I recently went to the new burger place in my neighborhood called Burger21. Located just south of Nova Drive off University Drive on the west side of the highway in Davie.

The decor reminds you of a 1950â€²s diner serving a wide variety with high quality burgers and milkshakes, but they actually offer more.

The burgers are great! The meat is not overcooked and they use Brioche Buns that are tastier then just plain buns (I am not getting paid to write this). If you do takeout like I do, you will like how they bring the food out and show it to you before packing it. The food is fresh and tasty.Â  I am also a fan of the Super Burger Bowl â€“ a terrific fresh salad (Bacon, Carrots, Mixed Greens, Red Onions, Romaine Lettuce, Tomatoes) with a Hamburger Patty.

I also tried the chicken tenders and as expected they tasted great. Even the thinly cut fries are properly seasoned and taste awesome. There is a wide variety of sauces you can select as a condiment. A wide variety of food to choose from:

Parking is good, just remember that there is plenty of parking in the back of the restaurant when it gets really busy.

I am now a fan and enjoy eating at Burger21. You can also order online:
https://burger21.hungerrush.com/

Be sure to sign up for their newsletter when you pay for your food â€“ or online â€“ it offers discounts and specials!

Hello future neighbors in five different countries, and welcome to the latest greatest issue of The Ocean Ridge Report. This newsletter is getting so popular that Donald Trump offered to buy me out, so he could start charging a heavy fee to all you readers out there. Donâ€™t worry â€“ I told The Donald to take a hike. Okay, seriously now â€“ the project keeps growing, so letâ€™s meet the new neighbors:

1) More Florida people. Say hola to Rob and Joan Spering, proud owners of lot 2 (photo). Originally from Pennsylvania, they now live in central Florida, just north of Orlando. Rob has a company thatâ€™s involved in the printing business, and Joan works in a seminary. The plan is to semi-retire in about three years, and split their time between Panama and Florida. With five kids and eight grandkids, I predict that theyâ€™ll have plenty of visitors.

2) Houses everywhere. Tom and Stephanieâ€™s house of lot 7 is steadily nearing completion, Leo and Willyâ€™s guesthouse on 14 is about finished, and Pieter and Jokaâ€™s guesthouse on 4 looks great after just three weeks (photos). Yvette on lot 15 is next in line; we should be starting her house before the end of March. Looks like we might actually have some neighbors within the next year or two â€“ wonâ€™t that be fun?

3) Residency update. Like Iâ€™ve said in past newsletters, establishing residency in Panama doesnâ€™t need to be a top priority at first, because you can live here as long as you want without ever becoming a resident.

However, I thought it might be a good idea for me to go ahead and establish residency here in Panama, if for no other reason than to be able to help our neighbors do the same thing if and when they want. After some research, I think I found the best attorney in Panama for getting this done â€“ thanks to Bob and Annie (lot 10) for giving me the original lead. Her name is Rainelda Mata-Kelly in Panama City; she is primarily an immigration attorney who has done â€œhundreds and hundredsâ€ of residency applications for foreigners around the world. Her fee is around $3300 â€“ a little high, but my theory has always been that itâ€™s worth paying a little more for the best. I started the process in February, and it should take 4-6 months.

Thatâ€™s it for now in Paradise. Patricia sends out kisses to everybody, starting with Loco and Coco !

An integrated body and mind is a naturally healthy space. Navigating from this space enhances experiences and interactions with everyone and everything. Many of the activities we choose to spend time on daily can have the opposite effect. Dis-intergration results in scattered thoughts, feelings, accomplishments and dreams. Furthermore, it affects how we move our physical bodies; and over an extended period of time, it deeply affects the nervous system.

The Chinese understood that every part contained the whole; and that every part could only be understood within the context of the whole. When practicing the art of tai chi chuan or any other body mind art, one begins by experiencing the various parts of our being at play, bringing into our awareness, the tensions in our body, the quality of our breathing, the sense of our nervous system, the motion of our mind and many other components of body mind interactions.

As the process of feeling our way into reality grows and matures, a deeper transformation occurs. We begin to enter into deeper spaces of quiet and eventually emptiness. We dance between the world of yin and yang and the whole of emptiness. Some call this body-mind harmony. I like to call this the rhythm of stillness.

Many people ask what they can do to protect themselves from outside influences. This is one of my favorite protective meditations from my medical qi gong teacher, Dr. Jerry Alan Johnson.

In modern energy healing modalities, it would not be considered unusual to hear of energy fields or auras. Even in Traditional Chinese Medicine the wei qi field is known to have a boundary that extends past the skin and its purpose is to offer protection. Pathogenic factors can enter in when our wei qi is weak. In addition to the wei qi field associated with the physical body, Dr. Jerry Alan Johnson defines a second and third wei qi or energy field associated with the mental/emotional and spiritual. With the spiritual energy field begin the furthest energy field out, next is the mental/emotional, and the physical energy field being the closest to the body.

This meditation is great to do before beginning your day of healing work. There are also certain places that one can use additional protection like entering a hospital, subway or airport.

Itâ€™s a chair â€¦ no itâ€™s a step stool. Itâ€™s both! What a great versatile piece! Artwork created by Sherri â€“ http://www.colorsbysherri.com

Want to buy this beautiful work? Contact us by e-mail

Acupuncture is over 5000 years old and is a time tested healing modality originating from the far East.Â  Each individual will experience acupuncture on a personal level and what one feels depends on their own state of being and level of sensitivity.Â  Itâ€™s common to feel a sensation of warmth, tingling or traveling Qi (energy) when the needles are inserted; and many experience a profound sense of relaxation and well being or possibly increased energy.Â  Acupuncture treats the whole being which includes body, mind, emotions and spirit.

Acupuncture points are located in the small depressions or hollows in the skin called gates.Â  Thru these gates, one can access the internal streams and rivers of energy that transport Qi and blood.Â  Qi and blood give sustenance to the interaction and cohesion of mind, body and spirit.Â  Fundamentally, illness manifests when Qi, Blood and Fluids are either blocked, depleted or imbalanced, which diminishes its healthy coherence to the point of dysfunction or eventually illness. Acupuncture can reorganize this dynamic by opening, closing or harmonizing the flows within the rivers and streams (channels).

The 8 extraordinary vesselÂ  system is a way to harmonize and heal our mind, body and spirit.Â  It broadens our ability to effect change on multiple levels, so we can expand the true nature of whole being.

This chair was made for a baby shower gift. This little boy is going to be the luckiest boy in the world. Artwork created by Sherri â€“ http://www.colorsbysherri.com

Want to buy this beautiful work? Contact us by e-mail

Now offering a wonderful selection of Fine Art Landscape Wildlife photography for sale to the public.

You can order prints online any time and we have selected one of the best image printing labs to create our prints on the best affordable stock.